Now that I’ve written my own book of poetry, I know how much a review means to an author/ poet. And so I have decided to write a review of the books I have read.

As this is my first, I decided to begin with a review of a book by a dear blogger friend,  Robbie Cheadle  who writes a blog Robbiesinspiration  (where she writes poetry, stories and shares her lovely cake recipes). This book is extremely special as she has written it with her mother, Elsie, who is the main protagonist in the book. It is Elsie’s memories of the war, that have given shape to the book.

I have my reasons to start with Robbie’s book. And that is, that I know she will forgive me in case of any mistakes that I may make during the ‘formal’ process of review- writing . For, writing a review is serious business and must be done justly and rightly. 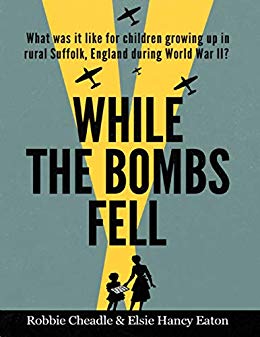 ‘While the Bombs Fell,’ is a book written by Robbie and her mother Elsie. From the day the book got published, I have wanted to read the book for I was curious to know what the outcome of a mother-daughter book would be.

The book, Robbie’s first  is a pleasant, light read of times in England during the second world war. It is a personal account of Elsie’s experiences and talks about growing up in those times. The language in the book is simple and flows easily from chapter to chapter providing a glimpse of life in England between 1942 to 1944 – things you don’t get to read of, in History books.

‘Britain had been at war with Nazi Germany since 1 September 1939, and the little girl could not remember a time when the distribution of food, coal, and clothing had not been controlled. She listened for the sound of bomber planes and air raid sirens without even realizing it and even possessed her own gas mask.’

I found the book a delightful read in many ways – from being a historical memoir to drawing a parallel with the stories narrated to me by my own grandmother in India. The old houses in India all had toilets outside the house.  This little information that it was the same in England too was interesting to note.

‘Her family also made use of an outside toilet unlike Elsie’s Aunt Alice, Mother’s older sister, who lived in a nice rented council house in the town with an inside bath and toilet.’

‘Occasionally Father joined the family for tea, and the children could not talk at the table. Children must be seen and not heard.’

Because I know Robbie through her blog, it was interesting to know that her grandfather had been posted in India –

‘The living room contained all of Mother and Father’s treasures. Mother owned a pottery figurine of a pretty maid feeding a pig which stood on the mantelpiece above the fireplace. Elsie thought it a most beautiful object. Two engraved brass vases also stood on the mantelpiece. The vases came from India. On completion of his seven years of military service in that country, Father had brought the vases home with him.’

‘Afterward, Father told Elsie about this statement. The station signs and the road signs had been removed so that if German paratroopers were ever dropped in England, they would be confused and not know where they were.’

‘The general euphoria about the on-going success of D-Day did seem to make the suffering of the girls, because of their conjunctivitis, more bearable.’

‘Every day Elsie would wake up in the morning with her eyes crusted so thickly with pus that she could hardly open them.  Mother would prepare a basin of warm water with boric acid powder dissolved in it.’

The book also has rhymes of those times, that Elsie, 5 then, remembers. The war-time recipes provided at the end of the book was new information to me which I found intriguing. There are so many excerpts I liked in the book, but it wouldn’t be fair to put them all here, so I have put a few. so you know what to expect from the book.

I would especially recommend it for school children because it’s history written in a way that’s not boring. My daughter read the book after me and she enjoyed it as well. I’m sure she’ll remember more of the second world war through this book than through any of the texts she’s read until now.

You can buy the book by clicking on the below link

While the Bombs Fell

I give the book 5 stars for information, simplicity of language and the flow. The book is a perfect read for children of the age group 7 to 13 or for those older who are interested in getting a quick understanding of life in England during the last 2 years’ of the war. Readers’ will definitely come out wiser.

Let me know how you enjoyed my first review and what additional information you think I should add.

This site uses Akismet to reduce spam. Learn how your comment data is processed.